One question that seems to come up quite often from homeowners is, “Do you know a fabricator that can refinish my solid surface countertop?”

While SPW has always focused on solely fabrication and installation and not refinishing, they helped roughly 25 customers in 2015 because they felt so sorry for the situation they were in.  Several of the homeowners that reached out were ready to sell their home and the countertops were badly scratched.  After calling around and finding no help they again asked SPW if they could do ANYTHING to help them.

Other customers had new kitchens installed with a less than steller finish.  The were not happy with the service or the refinishing they had recieved from the company they contracted with oroignally and now they were reaching out for help.

Several customers had either bought a home with solid surface countertops that were worn and scratched or were ready to make their existing kitchens look new again, but did not want to spend the money on all new countetops. They were growing frustrated in their search for a fabricator to refinish their countertops.

Three customers were renting homes and “somehow” the countertops got scratched, etched by nail polish remover, and drawn all over by a very stubborn sharpie. They were desperate to make the countertops look new again so they would not get a fine from the landlord, or worse, be forced to buy a new countertop.

After talking with these people and hearing their stories it became clear that their is a dedicated need for this service in North Texas.

SPW Surfaces is now offering solid surface finishing services to help fill this gap in the market. They use only the most state of the art equipment leaving your home as clean (if not cleaner) as it was originally.

Here are a few pictures of a recent commercial project that was recently refinished. Granted your kitchen countertops will hopefully never see dirt and grime buildup like this, but we think it does a great job showing what a difference a refinish by SPW can make. 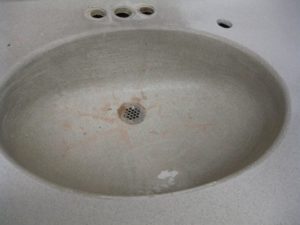 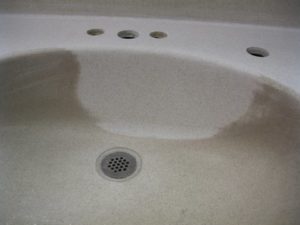 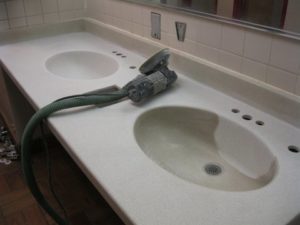